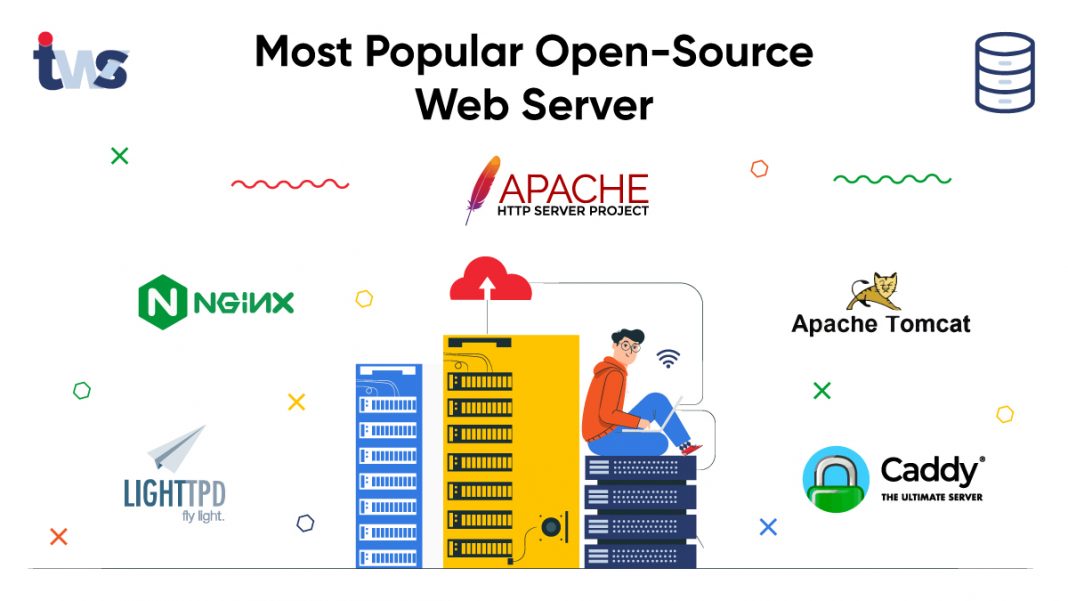 It’s been a long journey since web servers were released in the market in 1991. Initially, Apache was the only open source web server, but with time, now, we have several open source web servers. Let’s first know about the Web Servers. Try to understand the whole scenario with this example:
In your routine, you generally enter a web address (E.g  www.tekkiwebsolutions.com) on a web browser after loading a few seconds; it loads the web pages you requested. Right? It seems like a simple process, but behind the scenes, it’s all the web servers that help the user reach it.

Have a look at the role of web servers

When a user enters a web address on a browser, the web browser sends a request to a site’s web server. The web server that already stored the information about the website (including HTML and media) will give it to a browser that will be displayed to the user.

Is Google a webserver?

Which is the most used web server?

Apache, Nginx, Apache Tomcat, and Microsoft IIS are the most popular as well as used web servers on the world wide web.

Which is the fastest web server?

Every web server has its specialties and properties in which they are superior; these are superior to others. But, in the case of the fastest web servers, Nginx and Lighttpd won the race among all other web servers.

Apache is an open-source, one of the oldest and most used web servers. As per the reports of W3techs, almost 40% of the websites are powered using the Apache HTTP servers. Apache HTTP server is developed and maintained by the company Apache Software Foundation. Apache’s first version was released almost 20 years ago in 1995.
Apache HTTP server is written in C language and can be customized according to the project’s demands since it has an immense number of modules that extend its functionality. In addition to this, Apache offers to host multiple domains and websites with the feature of virtual hosting support. It means you can host several areas on a single server. For instance: abc.com, abc.edu, abc.us, etc.
Popular websites running on Apache HTTP open source web server: Apple, Adobe, Salesforce, Baidu, etc.

Initially, Nginx was developed to support the Apache server in the case of high-traffic websites. Nginx is pronounced as Engine-X, and its first version was released in 2004. Nginx web server secures the second position in the list of the open-source web server’s usage. It is used by just over 30% of all websites.
Nginx works on an asynchronous event-driven architecture to handle the situation of a concurrent session on a website. Nginx is popular among web servers due to low resource utilization and high concurrency.
Popular websites running on Nginx open source web server are Netflix, Dropbox, Soundcloud, Yandex, etc.

Apache Tomcat is one of the open-source and free Java web servers. It comes with the implementation of the Java servlet engines, Java Expression Language, and Java Server web pages. Apache Tomcat has become the number one choice of developers for Java application development. Sun Microsystems donate tomcat’s codebase to the Apache Software Foundation in 1999.
Talking about the Apache Tomcat Web Servers usage then runs over 1% of the websites. Apache Tomcat is not a full-fledged web server; in fact, it is not as efficient as the traditional web servers, Apache HTTP server, and Nginx.
Popular websites running on Apache Tomcat web server are Alibaba.com, Zillow.com, etc.

Lighttpd is pronounced as “Lightly” – initially released in March 2003. Lighttpd Web Server is also a free and open source that is specially designed for speed-critical applications. Distinguishing the Lighttpd web server from other web servers, it uses low memory footprints, small CPU loads, and speed optimizations.
Similar to the Nginx web server, it is based on event-driven architecture and can be used for websites having heavy traffic or concurrent connections. Other features of the Lighttpd web server include SSL/TLS support, virtual hosting, and multiple modules support. Popular websites running on Lighttpd are Windguru, Postgresql.org, etc.

No doubt, the life of the developer would have no meaning without the webserver, fortunately, we have an extensive list to choose the best and reliable open source web server. By reading this article, I think you will be able to choose the perfect open source web server for your websites.
If you need any kind of assistance in web development services, you can hire web developers from the company, Tekki Web Solutions Pvt. Ltd.