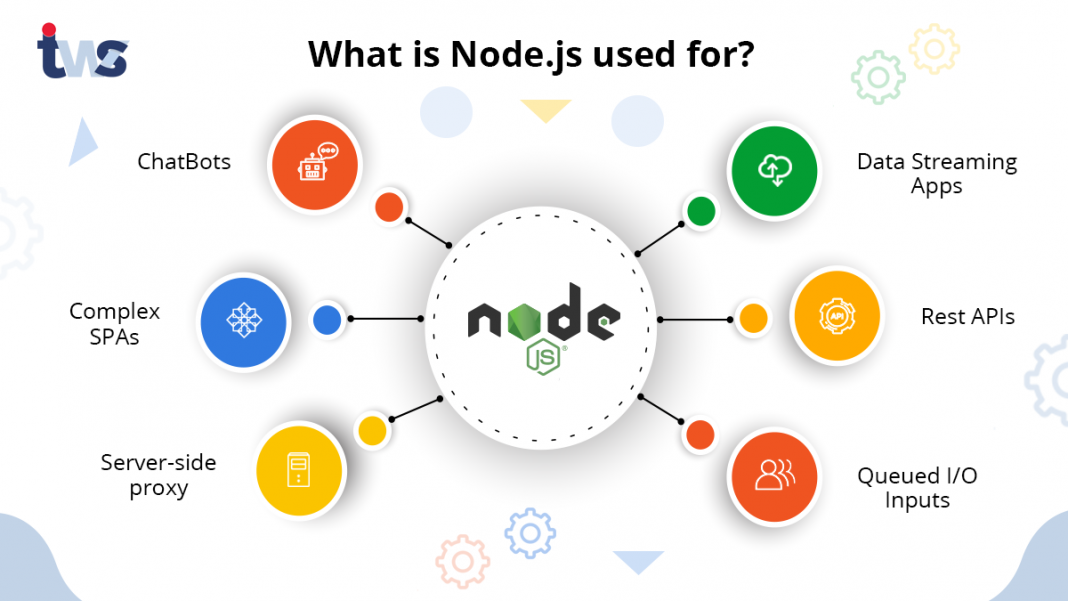 Undoubtedly, a decade has passed since the initial release of the nodejs, it has gained immense popularity among developers for the fantastic development of web applications. Node.js development is special for backend developers. The reason why most of the Node js Development Company use the nodejs for development is that it is an open-source, and community-loved engine. As we all know, Nodejs is a runtime built on the popular Chrome V8 JavaScript engine. Nodejs comes from the JavaScript family that allows the developers to use the same programming on both the front-end and back-end. Read more below to know more about What is Nodejs Used for and its use cases.

You may be wondering what is nodejs. Basically, Node.js is a run-time environment based on JavaScript, that can be used as frontend and backend. Talking about the origin of the Node.js platform, then it was created by the developer Ryan Dahl in the year 2009. Considering the popularity of the Node.js development on SimilarTech website, around 175k websites are developed using the node.js. The highest number of Node.js websites are developed in the United States (37,079) followed by Russia(12,079) and China(10,240).

Read More: What is Nodejs? | A Detailed Guide to Know

Nodejs is a highly customizable technology consisting of a server engine that uses the non-blocking event-based input/output model. Nodejs provides enhanced performance and agility, as it allows the translation of JavaScript code into the machine language. So, Nodejs provides a run-time environment, in which JavaScript code moves fast in the server-to-client direction. As we all know, traditional web-serving techniques, it requires a separate thread for each request. But, in the case of Nodejs, the scenario is completely changed. With the help of the non-blocking I/O model, it needs only a single thread to handle concurrent requests. To ensure the development speed and high-level of responsiveness, all the asynchronous tasks are taken by the event-loop.

Nodejs is one of the unique and fantastic frameworks from other JavaScript frameworks.

Are you looking for front-end development services?

We at TWS are ready to provide you the best front-end development services to boost your business.

Nodejs Use Cases: What is Nodejs used for?

The usage of the Nodejs platform is not only limited to web applications development but also used for enterprise applications including:

Node.js development is preferred by almost every tech giants from Microsoft, PayPal to Netflix. And the list of these enterprises is growing with time. Let’s explore the types of applications that can be developed using node.js development.

Read More: Most Popular Companies that use Nodejs in App Development

There is no doubt, a huge amount of money is spent by the entrepreneurs on customer care services. To resolve this problem, chatbots are used for better customer experience. Here, the good news is that nodejs has all the basic functionalities which are necessary for the development of chatbots. Nodejs offers features like server-side events, push notifications, and WebSockets, etc. All these features are required for real-time chatbots.

Examples of chatbots in Nodejs are drift and sample chatbot developed using Nodejs by Facebook.

The complex SPAs development consists of the allocation of a complete application to a single page application. Here are some examples of complex SPAs are online drawing tools, social networking tools, etc. Nodejs app development is considered the best for the asynchronous data flow on the backend. Nodejs development eliminates the need for page refreshing as it uses the event loop for simultaneous client requests. Several complex SPAs can be developed using Nodejs with other JavaScript frameworks like React, Meteor, Angular, Vue.js, etc.

This is a very common problem of third-party proxy services such as Nginx and HAProxy while building complex SPAs. Node.js eradicates this problem also as it can be easily employed as a server-side proxy for collecting data from various third-party resources. Node.js provides the option of proxying the different services with different response times. It is capable of handling a large number of simultaneous requests in a non-blocking manner. Node.js is beneficial for developing applications like Forbes, and BBC, where it requires to load content from third-party domains.

Nodejs development has become the number one choice for the development of data streaming applications. The concurrent multi-threading feature allows for bidirectional audio and video transmission. Data streaming is considered a complex process as it requires a continuous data stream. Unlike the traditional development platforms, Nodejs doesn’t require HTTP requests and responses for isolated events. It provides an open connection to the stream app’s data from the server to the local system. The Built-in stream modules allow you to transmit a huge amount of data in chunks.

No doubt, the availability of the SOAP(Simple Object Access Protocol) makes the data transferability easy, but it has made the API integration a complex part. The REST APIs are commonly used in the project like enterprise software development. In Nodejs development, the REST APIs are developed using Expressjs. Moreover, Nodejs doesn’t require additional procedures like JASON-to-object and vice-versa.

Generally, the application got crashed due to the huge amount of concurrent data which makes the database congested. Moreover, it is expensive to maintain concurrency and queue data because of the data load. But, thanks to the asynchronous nature of the Nodejs development and event-driven Nodejs architecture. The most alluring feature of the nodejs development is the queuing of data through caching and messaging queuing infrastructure like RabbitMQ, ZeroMQ, etc.

Microservices is one of the latest and popular development approach followed by Nodejs developers. Nodejs helps to make the application scalable due to the lightweight nature. Nodejs is the best and favorite technology of the developers for building microservices. An example of the microservices is the Netflix application which is splitting its application into smaller services.

We have listed some of the outstanding applications that can be built using Nodejs development. These applications are useful for the various industries involving media and entertainment, social network, healthcare, travel, banking, education and eLearning, Fintech, eCommerce, etc.

After reading the whole blog on Nodejs, I think it is no wonder for you to learn why tech giants like Netflix, Uber, LinkedIn, PayPal, etc. trusted the Nodejs development. Nodejs is the right platform for developers who wants to have the perfect performance and accuracy of their applications.
If you still have any doubt related to the nodejs development services, then hire nodejs developer of company, Tekki Web Solutions Pvt. Ltd.

We are looking to provide you the best outcomes for your business with our 10+ years of experienced developers.

Karan Sood is an Expert SEO/Marketing Executive with extensive experience in Content Writing specially with Technical background. He is assisting number of clients with Complete Marketing support.

UI Design Roadmap: How to Plan your Website Designing?